The IUHPFL German program began in 1962 in Trier, Germany. Two years later, Krefeld became the site for German students and remained so for 50 years. In 2015, our German program was moved to Graz, Austria, where IU Overseas Study has had a strong presence for over 40 years. Graz continues to be a popular and welcoming host city for our German learners.

See our Program Site Blogs to learn more about what happens during programs. 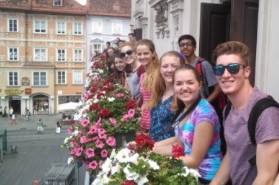